Freedom of thought
is as broad
as the world
in which we live.

There are as many
opportunities to choose
as there are concepts
to think about.
This can be frightening,
because it means
there are no holy ideas,
no sacred institutions
to hold onto,
but this uncertainty
merely reflects things
as they actually are.

All nature is a malleable,
dynamic environment
where change is unceasing
and nothing is spared
the winds of transformation.

Virtually everything
anyone knows in life
are a big collection
of guesses.
Remembering this
keeps you prepared
for the shifting sands of life.
When you are always willing
to reconsider what you believe,
your mode of existence
is better prepared
to accommodate
the chaos that is life.

One night many years ago
at a very difficult time in my life
I lay down after a hard and exhausting day.
My mind rumbled and tumbled
over the days problems for a long while
but after a time, I feel asleep.
Soon, my troubles washed away
and began to dream.

In my dream, I decided
I wanted to visit God.
In a moment, my body lifted
towards the city night skyline.
Slowly, I began to journey
first out above the city,
then high, high into the sky
out past the moon, out past mars,
then faster and faster, in no time at all
I was beyond Jupiter
then I was past the solar system
traveling faster and faster, out into the galaxy.
I journeyed deep into the night
always faster, past endless stars.

Soon I was going so fast
the stars blurred and disappeared
and I found myself deep, deep into darkness
at ever higher speed.
Then far, far in the distance
I saw a tiny shining star
and I realized the star was to be my destination.
As I traveled farther and farther,
the light began to grow in size, and I realized
the only reason it appeared small was because
it was so far away.
Then I began to hear a soft hum
far in the distance.
Moments later, I realized the sound
was a woman singing
a beautifully lilting Sanskrit song.

As I traveled closer, the light grew and grew
In seconds I could see it was larger than a planet
larger than the sun, larger than a solar system
larger than a galaxy, larger than anything
I could have ever imagined.
Suddenly I was there
and my pace slowed.
I could see others rising
into the gold-white light, just as I was
and I realized I was a soul that was merging
with a thousand-billion other souls.

Now inside the light, just as a infant merging
back into his mothers womb,
I floated in warm and soft
immeasurable compassion and kindness.
Perhaps a moment, maybe an eternity
I don’t know how long,
I dwelt there as a single tiny drop
in a vast ocean of love.
After a long, time I heard a voice gentle and kind
speak softly to me.
She said, “You may have whatever you want.”
To this day, I’m not sure what I said to her
or how long I stayed.
I don’t know when I left her,
but in the morning
I awoke in my room forever changed.

In the following months
my thoughts kept returning to my dream
and I realized my journey had been
inward as much as it had been outward
and that the great shining star I had visited
was somehow inside me
and outside me at the same time.
I soon realized as well that if such a place
existed in me, it must exist
in everything else that is alive
from the largest whale
down to the smallest microbe,
because, after all, I’m no more special
than billions upon billions
of other people and creatures.
I began to look at everything around me
with the new eyes of someone
who had been shown immense compassion
and could now see it in everything else too.

In the long years since,
I’ve seen many good times
full of love and laughter
with those I care about deeply
and many hard times too
full of terrible pain and strife
but even in the darkest hours I’ve been through
there always has been silver cords of hope
for me to hang onto
and a special sort of kindness that
that seems to envelope me like a cocoon
wherever I go.
Every day that I happen to look for it,
I can see a subtle pearlescent air of grace
that permeates all the world around.

The years have taught me to keep an eye out
for the unexpected and unusual
and I’ve learned that I can find joy
peeking out of all sorts of places
when most need it and when I least expect it.
Time after time, I’ve had the good fortune to notice
things that you’d have to see for yourself to believe.
To this day, I don’t know exactly what or whom
I visited upon all those years ago.
Was it my soul meeting the universal soul?
I don’t know.
In the fullness of time,
I don’t know why or how I have been
graced by the experiences
I’ve happened to have had
but I know what it is to feel joy,
and I am forever grateful.

Every person you ever meet
has two minds
it’s true as a summer day is long.
First is the mind we use every day
in our trials and striving
with dollars, doughnuts,
fears, gripes, hopes
and day-to-day struggles.

Then, deep inside each of us
living in our souls,
reaching out from our hearts,
is who we really are—
A mind as understanding, compassionate,
brilliant, wise, fearless and kind
as anyone who has ever lived.
It whispers often to your intuition
and is capable of such great presence
it can cause miracles
great and small to happen.

Sometimes,
when you are all alone
with someone talking
and your hearts touch
or when the stakes you face
are so ultimately dire
they reach clear through your entire being,
your everyday mind steps aside
and for awhile, your second mind awakes
to shine more brightly
than a June sky sun.

Someone once said
that it is hard to forget pain
but even harder
to remember sweetness
and that we learn
so little from peace
Now, that is true for many
but it’s also true
that there is a sort of kindness,
a special peace to be found
that is so all encompassing,
it settles into the marrow of your bones
and calls your soul
to the surface of your being
Some who wander, yet are not lost
wonder at all the world
every day, all day long
and happen across
pieces of such a peace
everywhere they go. 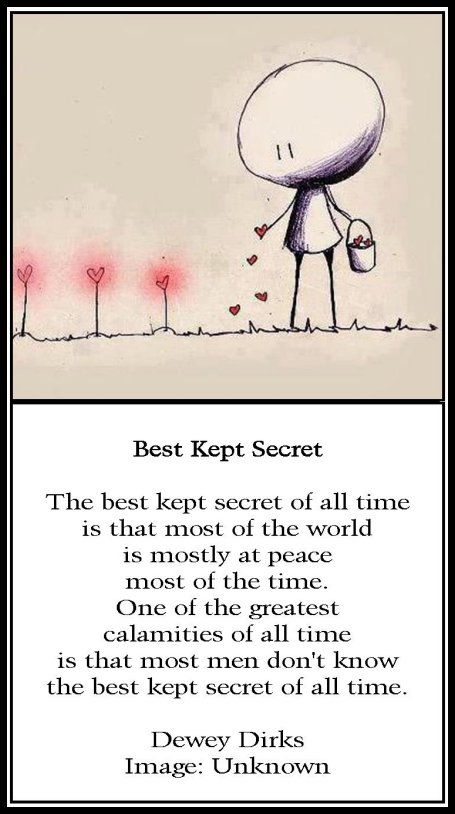 To Visit The Adriene Cunningham Advocacy Foundation, Click The Image:

To Visit The Old Questioning Way Blog, Click The Image: